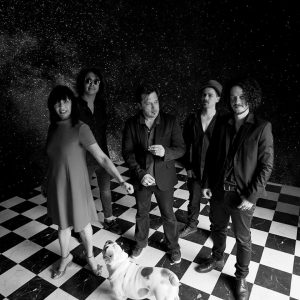 Dario Mars (aka Renaud Mayeur) is an awarded Belgian music composer with an impressive discography.

During 1999 and 2009 he was the lead singer/composer for the band Hulk, which resulted in 4 albums, including ‘Cowboy Coffee And Burned Knives’ produced by Chris Goss (Masters Of Reality, Sound City Players) and Dave Catching (Earthlings, Eagles Of Death Metal, …) at the infamous Rancho De La Luna Recording Studio. Jesse Hughes (Eagles Of Death Metal) and Brant Bjork (Kyuss, Fu Manchu, Brant Bjork) also contributed to this record…

During its days the band Hulk opened up for bands like Iggy Pop, Eagles Of Death Metal and MC5. They were also invited for the radio sessions for the John Peel show.

While Hulk took a break during 2007 a new band arised called Les Anges. This was more a straight-to-the-bone-rocknroll-band and during their brief existence they unleashed a fine record upon the musical world. Before breaking up during 2008, Les Anges received several great reviews and they were invited to support Triggerfinger during a few of their clubshows.

After a last Hulk-record in 2009 Dario Mars opened up his musical adventures by expanding to writing and composing movie soundtracks (for Eldorado by Bouli Lanners, Keren Ben Rafael, and others…) which culminated by a Magritte award of ‘Best Movie Soundtrack’ in 2013.

In march 2013 Renaud formed the band Dario Mars & The Guillotines after writing and composing more than 20 songs in his own homestudio. Their 12-tracks record was produced and mixed by Renaud Majeur himself.

The band seized to exist early 2018 and Renaud started writing some new tunes as Dario Mars. This resulted in ‘FLESH’, all played, recorded and produced by Renaud himself. It’s an impressive quasi voodoo-like imaginary soundscape of an apocalyptical spaghetti western where his fascination for Edgar Allan Poe and HP Lovercraft meet his love for early rock n’ roll (Gene Vincent, Eddie Cochran, Link Wray), the Stooges, MC5, Hawkwind and 1960’s french film noir mixed with Sergio Leone’s influences. The result is an organic haunted electric music.